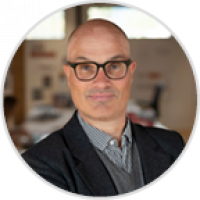 Cofounder and principal of PUBLIC Architecture + Communication, Brian Wakelin has worked in the architectural field for nearly thirty years and holds a Master of Architecture degree from the University of British Columbia. His design work is widely recognized and has received six AIBC awards, three awards from SCUP/AIA, and the Prix de Rome. Brian has presented his work at several national conferences and his writings have appeared in Design Quarterly, Academic Matters Journal and SAB Magazine. A thought leader and natural collaborator, he has a track record for achieving consensus with diverse and complex Education, First Nation and other Government clients. Brian is a past Chair of UBC’s Advisory Urban Design Panel and a former adjunct professor at the UBC School of Architecture and Landscape Architecture. He led the recently completed Skeena residence at UBC Okanagan, the first Passive House on-campus residence in Canada.