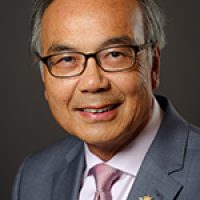 Minister of State for Trade, Ministry of Jobs, Economic Recovery and Innovation, Government of BC

George Chow was sworn in as British Columbia’s Minister of State for Trade on July 18, 2017, and was elected MLA for Vancouver-Fraserview on May 9, 2017.

The Minister of State for Trade is responsible for helping execute provincial trade initiatives and the delivery of trade programs in support of the mandate for the Ministry of Jobs, Economic Recovery and Innovation. The Minister of State’s role includes aiding in the promotion of global opportunities for B.C. businesses, unlocking new markets, creating jobs for British Columbians, and ensuring the future prosperity of B.C.’s economy. The Minister of State’s portfolio includes strengthening the provincial economy through strategic partnerships. Additional priorities include expanding export opportunities in the manufacturing, agriculture, and value-added wood sectors; capacity building for trade promotion; and promoting the tourism sector on trade missions.

Minister of State Chow was born in China and completed primary school in Hong Kong prior to settling in Vancouver in 1965. He graduated from UBC in mechanical engineering in 1975 and had a 30-year career with BC Hydro in power generation before serving two terms on Vancouver City Council from 2005 to 2011.

He enjoys being very active within his community and has served on many community organizations as a volunteer.

The Minister of State is a member of the Association of Professional Engineers and Geoscientists of BC and a Fellow of Engineers Canada.