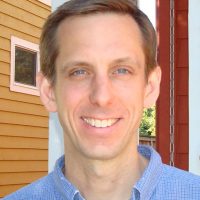 Emory is the founder and co-owner of FabCab. Emory has designed a range of residential projects including senior housing and multi-family mixed-use developments. He is former chair of the Northwest Universal Design Council, a coalition of multidisciplinary professionals that focuses on promoting inclusive design in the housing industry, and also led a team of designers to win first place in the city of Portland’s Courtyard Housing design competition in 2007. He is also the recipient of a National AIA 2009 Small Projects Honor Award as well as the CAPS (Certified Aging in Place) designee of the year for 2009. There has also been significant media coverage of his award-winning home through magazines, radio (NPR), and pod casting (AIA). Emory has been a speaker at numerous national and international conferences on ‘Universal Design’ and design for aging and holds a master’s degree in architecture from the University of Washington where he wrote his thesis on “Housing in Response to the Human Life Cycle.”